I've been visiting Seoul on business regularly for the past several years, but a number of things kept deterring me from taking on Korean Air. Among such things:

So, I was really daunted when my next business trip required travels to Seoul, Tokyo, and Sidney all in one week ended up including in its first leg of SFO-ICN as KE024. Due to my last minute planning, the most reasonable travel fare resulted in this arrangement. I knew it was going to be on B777, so as per SeatGuru chart for this flight, I was at least able to secure an aisle seat on the center row (i.e., you only get distracted by one guy in the middle getting in and out of seat, as opposed to an aisle seat on port or starboard side where you could get distracted by two people.) At SFO, I also rented "3:10 to Yuma" and "Resident Evil 3: Extinction" DVDs in advance as I wasn't expecting much of in-flight entertainment on Korean Air.

Low and behold, however...I was in for a pleasant surprise when I got on the flight. First of all, being a 777, first of all, it feels a lot newer than B747-400 that I was used to taking on Japan Airlines to Tokyo. (I should have known better by now that JAL is probably flying the oldest fleet across the Pacific among all the airlines out there---repeated delays on 787s aren't helping, though ANA has already switched most of their transpac fleet to 777 a while back.) Each coach class seat is equipped with a 10-inch widescreen LCD with complete VOD (I counted about 30 movie programs) which, heck, included both 3:10 to Yuma and Resident Evil. Darn.

Seat pitch felt slightly wider than B747 on JAL, and the bathrooms were larger, especially those equipped with diaper-changing tables. Attendants walked by the aisle every 1.5 hours or so, passing around water and juice, and the food was quite good. (I am biased as I love Korean food---in-flight bi bim bap easily makes my day.) Overall I could say this was the most comfortable coach flight I've ever taken.

A minor bummer is that it belongs to neither Star Alliance (United et al) and OneWorld (JAL and all), where I accumulate all my miles, but instead belong to the smaller SkyTeam network (Delta, NWA, Air France, etc). But if my next biz trip calls for a direct route to Incheon, I'd certainly take up on Korean Air. 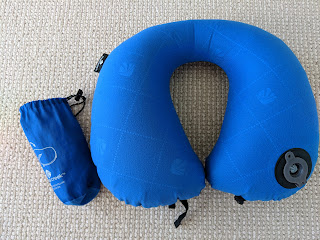 How to PREVENT, rather than BEAT, Jet Lag